Hi There, Youthful Yogis!
I would like to start by saying Happy Turkey Day to all those celebrating Thanksgiving next week!


Next, I hope everyone enjoyed the YouTube links in my last entry...was your Magic Carpet Ride relaxing? Mine was!!


Finally, have you ever wondered how the poses known as Warrior One, Warrior Two and Warrior Three got their names?


Warrior Poses, known in Sanskrit as Virabhadrasana, are really fun. And the story behind the name is awesome too; it's the tale of an angry god, a lock of hair, a scary dude and a king who ends up with the head of a mouse. You heard it here first, Youthful Yogis...I really think Hollywood should turn this epic adventure into a movie!

Let's travel back in time to ancient India where the myth of Virabhadra takes place.  First, we'll check in with an influential fellow whose name is Shiva:

Lord Shiva is one of the major deities, or gods, in Hindu mythology. He loves the icy mountains of the Himalayas, wears a spiffy leopard skin around his chest and a crescent moon in his hair.  Shiva is known as both the "transformer" and the "destroyer", responsible for bringing things to an end so that new things can find their start.


According to Hindu mythology, Lord Shiva, for reasons that are complicated and a little creepy, was not able to marry the woman he loved. This made him so angry that he pulled out some of his thick, dark hair (ouch, I know!) and ground it into the earth. What came out of Shiva's locks of hair was another god who was scary and huge and had many arms; he went by the name Virabhadra:


You can read about this ferocious fellow in books and online. Here is what our old friend Wikipedia has to say about him: "...his (Virabhadra's) tall body reached the high heavens, he was dark as the clouds, three burning eyes, and fiery hair; he wore a garland of skulls and carried terrible weapons."

Needless to say, things got a little crazy with Virabhdra on the scene. In fact, he broke a lot of things, trampled on some people, and even cut off the head of the king who was responsible for messing up Shiva's marriage plans. The whole situation was nuts!


Luckily for all involved, another important god named Brahma came along and advised the gods to make peace. Everyone was forgiven and Lord Shiva even showed some serious compassion by giving the poor king another head....only problem?  It wasn't  the head he started with! In fact, it was the head of a mouse, which could be kind of a drag, depending on how you look at things. But the king was pretty happy and, all in all, things ended on a very positive note:

Let's take a look at the three poses named after the guy with a gad zillion arms!

As you can see, these poses are similar, yet different. In Warrior One the hips face forward, in Warrior Two they open wide. Warrior Three is done by standing on one leg...but the arms are still straight and the legs are strong.

We are not trying to be ferocious warriors when practicing Virabhadrasana One, Two and Three. Instead, we are looking to find a sense of strength and inner calm. Working with these poses creates mental clarity. We feel confident and clear and ready to take on whatever life has has to offer.


Don't expect to turn into a fiery eyed giant with weird hair when you practice Virabhadrasana, Youthful Yogis...

But do be ready to tap into a strength you might not have known you had....


It's been lots of fun sharing the myth of Virabhadra with you today, Youthful Yogis. I hope you will give the warrior poses a try! Think of Virabhadra with his many arms as you lift and stretch your limbs in each pose. Feel the earth beneath you and focus your gaze off into the distance, keeping your eyes relaxed and your face soft. You'll feel great, I know. 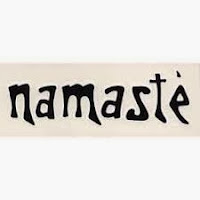 Posted by Ellen Campbell at 8:20 PM No comments: