Hi Youthful Yogis!
What has the body of a human, the head and wings of an eagle and wears  a golden crown?...Garuda, of course!

You may be scratching your head and wondering if Garuda is the name of that new rock band your  cousin was talking about. Well, no, as far as I've heard there is no rock band called Garuda. Actually, Garuda is a mythical creature from Hindu mythology and there are many amazing paintings and sculptures of Garuda all around the world .

Just to refresh your memory, Hinduism is one of the world's major religions: it began long ago in the part of the world that is now India.  There are many exotic gods and goddesses in Hindu mythology and some of them show up in the practice of yoga, which is really pretty cool. Just one quick thing I need to mention...yoga is not a religion, and people of all religions practice yoga!

Here are a few of the gods, also known as "deities", that I love from Hindu mythology. You can go to the library or look online to see more, if you like. I'll show some yoga poses and mudras named after Hindu deities another time. For now...enjoy meeting Garuda, Ganesha, and Hanuman! 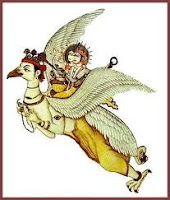 1) Garuda means "eagle" and this deity has the head and wings of an eagle and the body of a human. Garuda carries the Hindu god Vishnu on his back; he is said to be the king of birds and a destroyer of evil. Garuda is well loved for his strength and for his sense of knowing right from wrong. 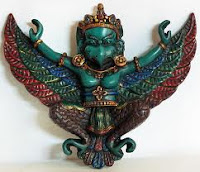 2) Ganesha  has the head of an elephant and a big round belly! He is said to be the "remover of obstacles", meaning having him around might help you to succeed. Ganesha is very popular with shop owners in India...they often have pictures or sculptures of this colorful deity on display.

There are so many wonderful examples of Ganesha out there, I hardly know which ones to show you...here are three, but please search for more on your own! 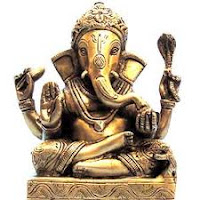 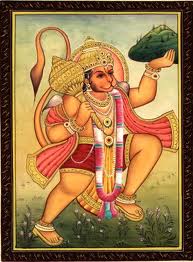 3) Hanuman is known as the "monkey god" and he is very popular with people all over the world. Hanuman is strong and determined; he fights against evil and is even able to change his shape and size when he wants to! 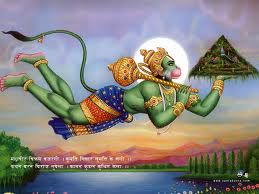 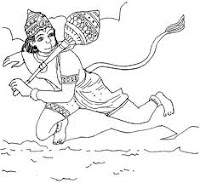 It's been a blast looking at Hindu deities with you today, Youthful Yogis. Soon we'll  look at how Hanuman, Ganesha and Garuda find their way onto our yoga mats; but for now, have fun exploring these mythical images online or in a book. If you're feeling creative, you can draw your own version of Ganesha, Garuda and Hanuman...or even make up a deity of your own! Get help scanning your artwork, then email it to me at youthfulyogis@gmail.com  I'll hang it in the Art Gallery!

Have a great day, see you again soon!