Happy New Year, Youthful Yogis!
I hope everyone has enjoyed a very wonderful holiday season. As we enter a brand new year, it's time to think of all the inspiring things we can do in 2013. Here are a few possibilities....

OK, Youthful Yogis, I admit it... my list of inspiring things to do in 2013 was kind of a joke. Mostly I just wanted to get your attention. Now I will tell you what you really might like.....

As you know, there are many, many yoga poses to choose from. We have already covered some poses that are energizing (headstand, plank pose, dancer pose) as well as a few that are relaxing (child's pose, legs up the wall, "magic carpet.")  But how about a pose that has a great story behind it?  That sounds like just what we need for 2013!

So here we go...once upon a time, long long ago, a little monkey thought that the sun was a ripe mango:

When the monkey reached for the sun, which he thought was a mango, he was hit by a thunderbolt, called Vajra. This disfigured his face! Vayu, the deity of air, was very upset and began to go into hiding...taking all the air in the world with him! Of course something had to be done to improve the situation: the devas (a bunch of deities who somehow got mixed up in this whole affair) decided to do the monkey a huge favor, mostly in order to keep Vayu happy which would mean all living beings would have air to breath again.


Here is what the monkey, known as Hanuman, received from the gods: wisdom, courage, a long life, protection from fire, protection from water, happiness and contentment. As if all of this were not enough, the gods also bestowed Hanuman with the ability to change size. Seriously, he became a shape shifter!! I guess this made Vayu pretty happy because, just for good measure, he made it so that Hanuman could run and fly faster than the wind!

You're probably thinking that little Hanuman pranced off into the forest never to be heard from again and that this story of the funny-faced monkey god is complete. But no, Hanuman did not prance off into the forest: he actually became one of the most beloved deities in Hindu mythology, thanks to his physical strength, his power of devotion, and his desire to fight the forces of evil.

Let me tell you, Hanuman really put all of his abilities to good use! One story tells of how the monkey god was sent to the mountains to find a special herb, the only thing that could cure the wounds of Lakshmana, a hero who was wounded in battle. When Hanuman was unsure of which herb to pick, he made himself huge and--what else?--picked up an entire mountain to make sure he brought the correct medicine to the battlefield!


Another famous story tells of how Sita, the wife of Rama, was imprisoned on an island. No one dared to cross the sea to save her...no one that is, except our friend Hanuman! He made himself huge, then leaped across the Indian mainland and over the water to the island where Sita was being held. A bunch of stuff happened but, long story short, Hanuman saved Sita, Rama won a big battle, songs were written about it and a yoga pose got its name. Honestly, Youthful Yogis, you were not expecting all of that, were you??!

Now that we know what a brave and faithful character Hanuman was, let's take a look at the yoga pose named after him. It's known as Hanumanasana, and it's a very challenging posture inspired by the great leap that Hanuman made in order to save Sita.  Here is one artist's depiction of Hanuman crossing the ocean:

And here is what the pose, inspired by that ocean crossing, looks like:

Here is another example:

I know what you are thinking, Youthful Yogis...OUCH! But guess what? You can do what's called a "modified version" of the pose like the guy in the top part of the picture below: 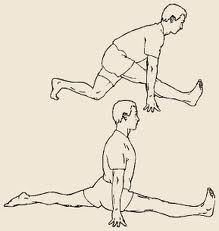 Also, and most importantly, it is necessary to do quite a few "warm up" poses before making your way into any version of Hanumanasana. Here are a few poses to warm up with and, of course, you can add others if you like:


Hanumanasana is definitely a challenging pose; it stretches the hamstrings, thighs and groin (the area between the belly and the thigh, on either side of the body). It's also good for the internal organs!

Hanumanasana is a stretch in all senses of the word. It takes focus, courage, and a willingness to overcome obstacles and expand further than we may think possible...just as Hanuman did on his way to rescue Sita!

Are you ready to give Hanumanasana a try, Youthful Yogis? Remember to warm up first, and to listen to your body as you move carefully into the pose. By the way, there is one more part of the story that I meant to tell you...the gods gave Hanuman the gift of speed, agility and immortality, but they also made him unable to recognize his own abilities!  Hanuman had to be reminded by others of all that he was capable of, just as most of need encouragement at times to realize our true potential!

It's been so much fun sharing the story of Hanuman with you today, Youthful Yogis. I hope the legend of the monkey god will inspire you as we move into the new year. As a final treat, I'd like to share a recording of "Hanuman Chalisa" with you; it's a heartfelt song (kirtan) based on the legend of Lord Hanuman and it is performed in what's known as a "call and response" style. The main singer is named Krishna Das and the recording is on YouTube, so make sure you get permission from an adult before you check it out. Just click on the words Hanuman Chalisa below and it will link you to the You Tube site...