Hi Youthful Yogis!
Have you had a chance to try the Sitali breath we talked about the other day?  I hope it's helping you to stay cool, especially if you're feeling as flamin' hot as this guy....

Which reminds me, I've found a new way to chill out and it doesn't involve water ballet, first class flights to Mt. Everest or funny positions that you make with your tongue (although "taco tongue" was pretty great, don't you think?!)

You heard it here first, Youthful Yogis: my latest way of beating the heat is..... 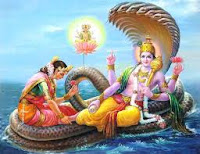 We talked about Hindu mythology a few weeks ago and here's a quick re-cap: Hinduism is one of the world's oldest religions. Hindu mythology tells the story of gods and goddesses, also known as deities, who: fall in love, destroy things, fix things, travel all around the world, dance, make music and... sometimes hang out with snakes, yikes!

There are so many wonderful images from Hindu mythology to explore, and it's really lots of fun. This is an activity you can do in the cool comfort of a library or at home on your computer over the summer, if it's OK with your mom and dad. Take a look at some of the amazing deities I've found recently...they're almost making me forget that it's 101 degrees outside!

I'll start with Mr. I'm-hot-and-I-have-two-Heads from the top of the page. This deity is named Agni, which  I realize sounds a little like some new style of Italian pasta that they might be serving at summer camp this year. But the word agni actually means "fire" and in Hindu mythology the god Agni is said to be born wherever a fire is lit; Agni symbolizes "the vital spark of life" and a part of him is in all living things.  If that's not cool, I don't know what is...!


I also want to talk about the god Vishnu, who is a pretty major deal in Hindu mythology...Vishnu is the "keeper of life" who sustains the cosmos. He has a beautiful wife, named Lakshmi, and he is often pictured with a seashell and a Lotus flower. 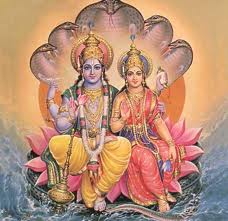 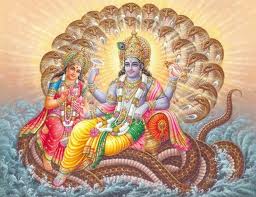 ...but let's not forget the snake!  Vishnu seems to have a pretty good relationship with all things slithery. In fact, he is often seen floating on a snake named Shesha. In other pictures, the many-headed Shesha is shading Vishnu's head! 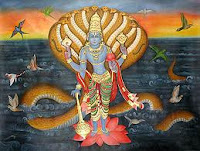 One last thing...it's said that whenever one of Shesha's 1,000 mouths yawns, there is an earthquake somewhere in the world...yikes, again!

Well, that's all the time we have today, Youthful Yogis. I hope you've enjoyed looking at Hindu deities, even though we did end on kind of a slithery note.

Have fun exploring mythology on your own, and tell me what you find! Meanwhile, thinking about those snakes hovering overhead has given me the shivers. I guess I'll head outside for some fresh air...101 degrees is sounding pretty good to me right now!