I hope everyone had a great weekend. Guess what happened to me? I bumped into a bunch of bats... no kidding! I was actually trying to catch a glimpse of that annular eclipse I told you about; I was parked near a bridge and just as the sun went down, thousands of bats came flying out from under the bridge... it was a pretty awesome sight!

I haven't figured out if there are any yoga poses named after bats, but there are  definitely bird-like poses in yoga...here are a couple of Youthful Yogis favorites:


Pigeon pose
This pose is called Kapotasana in Sanskrit. It stretches the hips, ankles and thighs. 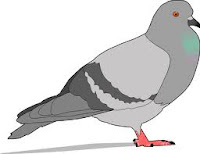 Eagle pose
You already know about Eagle Mudra; this pose, called Garudasana in Sanskrit, is great for the joints, shoulders and legs. But don't do it if you have a knee injury!

We'll look at some more yoga poses together soon, Youthful Yogis. For now, have fun with Pigeon Pose and Eagle Pose...and let me know if you bump into any bats!

Posted by Ellen Campbell at 7:16 AM